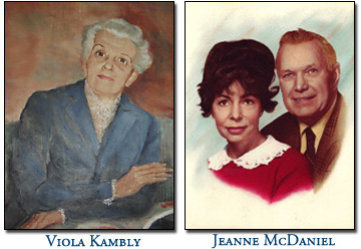 Over 70 years ago, Viola Kambly moved to Battle Creek from Ann Arbor and founded a private boarding school; 2021 marks Kambly Living Center's 72th Anniversary. Known originally as the Battle Creek School for Exceptional Children, Mrs. Kambly turned a huge home north of downtown into a safe and secure environment for children with developmental disabilities. "The youngsters came mainly from the Detroit area; a few from Indiana, Illinois, and Florida," said Jack Holtman, former executive director of the Kambly Living Center. "There were not a lot of programs back then for children with disabilities, so when word got out about what Mrs. Kambly was doing, requests began to filter in." There are 30 residents at Kambly, ten have lived there for over thirty years.

Mrs. Kambly and her dedicated staff provided the educational foundation for the residents until her death in 1959. Jeanne McDaniel, a registered nurse, assumed the duties of director from her mother and reorganized the center into a nonprofit and renamed it The Kambly School for Retarded Children. By the 1970s, regulations from the state said that state-supported children could stay at Kambly until they turned 18, but then they had to return to their families or placed into foster care programs. Individuals who were privately supported could stay indefinitely. Because of those requirements, the Kambly board changed the direction of the organization and reclassified the facility from a school to a licensed adult foster care home.

That decision was based upon concern for the students." said Holtman. "Many of them had been in our school since they were youngsters; this was their home." The shift was made because the board felt that changing the environment of the children would be a devastating disruption in their lives, especially since many of them had no other families. So Kambly became a long-term care facility.